If any of you still check this blog, here is a link to Chris's Great Divide blog that I'll be updating with info, pictures, and his current location. He'll be starting his ride this Saturday hopefully, so keep checking back to see how he's doing!

It was great to see everyone last week!
Posted by Marni at 11:41 PM 34 comments:

Hey Sam we need that list of movies to watch! My Netflix is getting low.
Posted by Chris at 12:36 AM 2 comments:

To blog or not to blog-what Bonnie has been doing

Is it necessary to give age and weight and Zodiac? John and I have been trying to cut back on things we have to do -- and then when we succeeded in cuting out a secretarial job for my literary group, and John dropped Kiwanis -- somehow we weakened and have become elders in our church. Oh, we said NO over and over - and then yes. I have warned them we can't hear and we're forgetful. But for fun I'm on a tear reading. Judy gave me Sara Paretsky's book "Fire Sale" and I tore through it. Then I finished Dr. Douglas Bey's biographical book about his experiences as a psychiatrist during the Viet Nam war. He was motivated by his experiences concerning post traumatic stress which is much reported in the present day Irag conflict. I enjoyed his book. Now I'm reading "A Beautiful Mind"... not a fast read like Fireside -- but very interesting. While the movie was based on John Nash, the book is quite different... the intersection of Princeton students, grad students, teachers and mathematicians. I learned that it wasn't until Woodrow Wilson reluctantly allowed a good friend that happened to be a mathematician to develop a program at Princeton....that math was really not strong in any colleges or universities in the US. Wilson thought liberal arts was where it was at -- as did most educators. World War II and the German mathematicians who came to the US made the difference. Of course, there were mathematicians, but little respect for their brilliance. Anyway, I think all the Plesko Family bloggers might enjoy "A Beautiful Mind."
John is reading "State of Denial" and we're both reading some poetry--Yeats, "The Song of the Wandering Aengus"...can't find what an Aengus is--help! .. and another poem by Elizabeth Bishop I Love called "One Art." The poem is a villanelle --you know, a style of poetry like a sonnet.
Posted by John Plesko at 3:16 PM 1 comment: 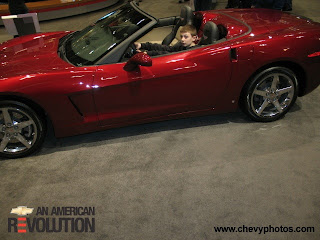 This is the Corvette I picked out for my 16th birthday. Now to figure out a way to pay for it and the insurance.

Patty has retired from being the editor of the Times Tribune. Now she is campaigning to be the alderman for the 4th Ward in Troy. She's running against our next door neighbor.

Fiasco -- Some thoughts About Our Country At War

I recently finished reading Thomas Rick's book, "Fiasco" which is an amazing history of American's "Mis-adventure" in Iraq. I was prompted to read this book after reading Woodward's "State of Denial." (Thanks Jessica) It was also mentioned by Thomas Barnett in his blog and perhaps "The Pentagon's New Map."

Anyway, this is an exciting book that reads almost like a novel rather than non fiction.

This book makes it clear that America has been fighting an insurgency since 2003. The claim that we are fighting terrorists seems to be untrue. To a large extent, the military created the enemy we are currently fighting. We did almost everything wrong to win the hearts and minds of the public of Iraq. Most of the enemy is comprised of Sunni military who could have been brought into the Iraq Army we are trying to build. The other bad guys are the Shiite followers of Maqtadr al-Sadr who don't want an occupying army.

One of the other things that I learned was the amazing talent of the U.S. military although they made many serious errors. Its clear that you can be bright, highly trained, and motivated and still lose a war.

I can see that counties like the US can and will likely end up losing this war against a poor, technologically limited people who are willing to fight an unconventional war. There are just too many Iraqi insurgents and they have learned how to fight the mighty US military because they have won the support of the people.

I recommend this book highly. After reading Woodward's and Rick's book, there is no way I can support the people who got us into this war.

We can't leave Iraq precisely because of the mess Bush created, but we can't continue to be an occupying force.
Posted by Todd Plesko at 7:18 PM 1 comment: